is an American artist and paints in a contemporary impressionist style. His mediums include oil, pastel and he draws daily with both graphite and charcoal.

Donny began his art education while earning his Bachelors of Architecture at the University of Kentucky.  He has continued his art education through self teaching and workshops with such artists as Scott Burdick and Kim English. He also attributes his development as an artist to many years designing and illustration presentations for clients such as Disney, Crayola, NASA, Seaworld, Warner Brothers, and Nickelodeon.

Donny was a founding Board Member of the Kentucky School of Art at Spalding University in Louisville and sat on the Executive Committee for two years.  He is currently a member of the Deans Advisory Board at the University of Kentucky College of Design.  His Weber Gallery in Louisville offers art education and representation to Special Needs Students and exhibits and sells their work through side-by-side programs with professional artists.

Donny and his wife Debra live in Santa Fe and Louisville, with studios in both locales.

Barbara is an award-winning artist who has shown her work nationally and internationally. She is a Signature member of the Pastel Society of America and Plein Air Painters of New Mexico (PAPNM), and has Associate memberships in Oil Painters of America (OPA) and Women Artists of the West (WAOW). Her current shows include OPA National Show in Fredericksburg, Texas, the OPA Western Regional Art Show in Utah, and ArtsThrive Exhibition at the Albuquerque Museum. In the recent past she has won Best of Show and the Figurative Award of Excellence for 2018 and 2019 PAPNM National Shows and an Award of Excellence at the Fechin Studio at the Taos Art Museum. Other awards include the Award of Excellence for Seascape at 2012 OPA National Show, and 2019 OPA Salon Show Honorable Mention.

After attending art school in France, she earned an MA in the US in Community and Regional Planning, worked as a City Planner and taught design and drawing as a professor in the UNM Dept. of Architecture and Planning,

After myriad studio hours, artistic guidance, and numerous trips to the studios and museums of Brussels, Bruges, Amsterdam, and Paris while under the tutelage of Maud Henon, Gill-Tapia spent ten years in New York City. There he attended classes in painting, drawing and anatomy from the masters at the Art Student’s League, The New York Academy, and the National Academy of Art. He served as monitor, taught classes to youths and adults during this period, and he later maintained a studio in the city. He showed at the Javit’s Center, among other galleries. He now resides and paints in Santa Fe, and shows in the Manitou Gallery.

grew up in Texas, where he began to draw at an early age. Encouraged by his parents, he took art lessons in high school, and earned a Bachelor of Fine Arts from the University of Mississippi. After serving in the Air Force he continued his education at the University of Texas at Austin, and received a Master of Fine Arts degree with a thesis on portraiture. He settled in the Texas Hill Country in 1971 and began his professional career, focusing mostly on landscape and wildlife painting. He and his wife Sharon became drawn to New Mexico after many visits, moved to Santa Fe in 1987, and have lived there ever since. New Mexico landscapes and our wonderful sunsets have become a major part of his subject matter, but scenes from several trips to Europe and portrait commissions given welcome variety to his work. He has been featured in several publications, including Southwest Art and Art of the West, and he is represented by Meyer Gallery in Santa Fe. 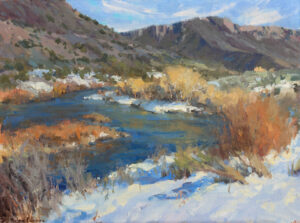 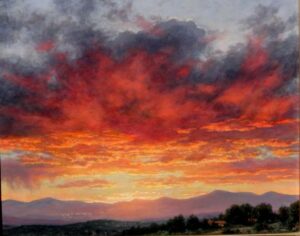